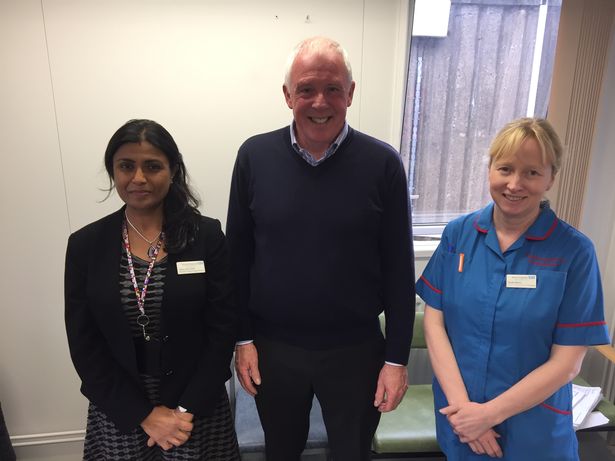 Organised by Vulcan Lodges, W.Bro Mick Hitchcock, Freemasons from across Derbyshire will be taking advantage of a test to check for prostate cancer as the next stage of a successful project to take screening for the disease into the community gets under way.

Inspire Health – Fighting Prostate Cancer has gone from strength to strength since being launched by Jyoti Shah, a consultant urological surgeon for Burton Hospitals NHS Foundation Trust, based at Queen’s Hospital. The campaign aims to get more men to get their prostate checked for signs of the male cancer.

Screening sessions will be heading around the Freemasonry Lodges in Derbyshire, with one stop organised at the Pirelli Stadium provided by Mr Robinson, to test men who are Freemasons. There will be two days of screening in November, two in December, two in January and one date in February.

In Derbyshire alone there are nearly 2,850 Freemasons with 300 already signed up for the screening. The team has have spaces to screen around 350 and they are expected to fill up fast.

W.Bro Michael Hitchcock, the Freemansons’ Derbyshire provincial grand charity steward, said “as soon as he opened up the suggestion he was inundated with people wanting to take part. We are constantly making charitable donations within our local communities and providing skills and time to further enhance our charitable work. We shall be donating some money to the Fighting Prostate Cancer campaign to support the ongoing work they do in the community against this very common male cancer.”

Only men have a prostate gland. The prostate is usually the size and shape of a walnut and grows bigger as you get older. It sits underneath the bladder and surrounds the urethra – the tube men urinate (pee) and ejaculate through.

Its main job is to help make semen – the fluid that carries sperm.

The most common prostate problems are an enlarged prostate, prostatitis and prostate cancer.

This needs treatment to stop it spreading outside the prostate.

Changes to look out for include:

*Needing to urinate more often than usual, including at night – for example if you often need to go again after two hours

*Straining or taking a long time to finish urinating

*A weak flow when you urinate

*A feeling that you’re not emptying your bladder fully

*Dribbling urine after you finish.

Please click here for full details of the initiative including the dates, locations and information on how to book your appointment.