Historic Meeting of Six Lodges sharing the Vulcan name from Around the World.

On Monday the 13th of July 2015 saw a historic meeting come together, as six Freemasons Lodges, all sharing the Vulcan name from around the Globe, met at Alfreton Masonic Hall, Derby Road, Alfreton within the Province of Derbyshire. 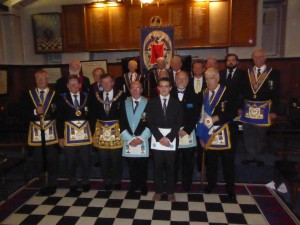 This most auspicious occasion was arranged to pass Bro Jonathan Wheeler of Kansas Lodge 229, to the degree of Fellowcraft. Special dispensation was obtained from UGLE, Grand Lodge of Kansas and also The Provincial Grand Master of Derbyshire, Arthur Steven Varley, who also made allowances in his busy calendar for himself and his team to attend.

At the ceremony we had over 70 in attendance, and its was conducted in fine style, although there was a problem with dialect in parts of the ceremony as our Senior Deacon is from County Durham, the Junior Deacon from Derbyshire, and of course the candidate from Kansas. This however, did not detract from the evening, but made the ceremony all that more special. 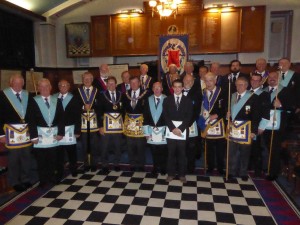 Bro Jonathan is the son of W.Bro Donald Wheeler, the current secretary of Lodge 229 in Walnut, Kansas. This is a small farming community located in Crawford County, in the southeast corner of the State. Vulcan 229 are a family lodge consisting of 32 members of which several are fourth-generation and fifth-generation freemasons. It was a very proud moment for W. Bro Don, and heartfelt thanks were tendered, and humbly received. 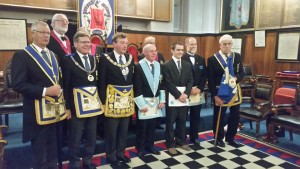 The Derbyshire Provincial Grand Master visits Vulcan Lodge in Alfreton, along with the provincial team in support of an Historic Masonic Event

Now in its Tenth year, having travelled over 90k miles miles to 197 Lodges in five countries on four continents plus travelled on a cruise of the Caribbean and been held by 76 Grand masters no doubt, with the gavel itself having special meaning to the Brethren in Walnut county. 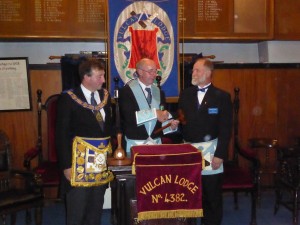 Walnut has the distinction of being the “Osage Orange Capital of the World” and this gavel was crafted from Osage Orange or “hedge” by Brother George Jefferies of Lotus Lodge, Blue Mound, Kansas. Hedge posts (used for building fences) are a mainstay business in the Walnut district.

The travelling Gavel, spends most of it time whipping around Kansas and the various lodges, and in the spirit of Masonic charity towards others, Vulcan lodge #229 ask that any Kansas Lodge that has possession of the gavel beyond ten days make a $100 donation to the Kansas Masonic Foundation Cancer Research Center. The travelling gavel, to date has raised over $1,300 for the KMF. 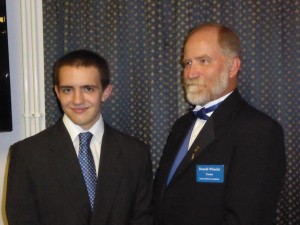 A proud Father, Donald Wheeler and his Son, Jonathan at a superb festive Board at Alfreton Golf club.

Afterwards, we all adjourned to the Festive board, at the Alfreton golf club, where a fantastic time was had by all in attendance,

The Derbyshire Provincial Grand Master, Arthur Steven Varley made an address, and a special presentation of the famed Derbyshire Festival masonic Tie, to Bro. Jonathan Wheeler, who was indeed grateful, but who’s only complaint about the night, was the fact we did not have American Ale as refreshment! But it mattered not, as our merriment continued. 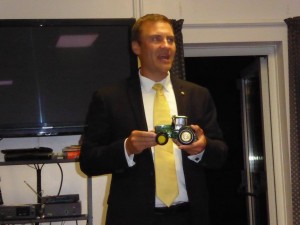 At the end of the evening W.Bro Don Wheeler and Bro Jonathan Wheeler, gave a demonstration of the Proficiency of the Former, as it would be given, as part of the ritual performed in Vulcan 229.

It was a great spectacle seeing a father and son, and two brothers working in such fine harmony. Very inspiring for all he stayed to the end, and a fantastic way to cap off a most joyous and fraternal evening.