At the end of this month Mr. John Thomas Todd, JP of Pendean, Blackwell, who has been the general manager of the Blackwell Colliery Co. for close upon 32 years, will retire. Acting upon medical advice, Mr. Todd is relinquishing the active duties of colliery manager at Blackwell and an important undertaking of which he has been the guiding spirit for a longer period than any  predecessor, and indeed any director with the exception of the chairman of the Company. This event, even in these stirring industrial times, will occasion more than a passing interest in the Midlands coal trade and of Derbyshire in particular for Mr. Todd in his day has played a great part and tilled a leading role in an industry in which he has distinguished himself dining a period of over half a century.

At a board meeting in London this Thursday. week the directors reviewed the situation and appointed Mr. Todd’s son in-law Mr.. H. Ellis his successor as the general manager. Mr. Todd’s services are retained in the capacity of a general consulting manager. There will he no departure from any existing managerial policy, because Mr. Ellis has for close upon three years acted as the agent of the collieries under Mr. Todd, and is thus experienced in the duties of the office to which he has been appointed. Mr. Todd will not he leaving Blackwell just yet. as he has not yet fully decided upon a future residence in the south, but he hopes to get away no later than September, because it is imperative he should he in the south for the winter. At the time of writing he is confined to the house with an attack of bronchitis, from which he is making a good recovery. A host of commercial acquaintances and thousands of employees  of the firm, despite past conflicts, will wish Mr. Todd many years of happiness in the more genial and less exacting life in the south.

Mr. Todd is a Durham man and commenced his mining career in 1872. Thus he has completed no less than 56 years in the pit and in commercial management. He served his articles at Hetton Collieries, Durham, and secured his first class certificate at Newcastle as long ago as January, 1879. He spent two years at Hamsteels, in Durham and for eight years Mr. Todd was associated with that famous Durham firm of Messrs. Pease and Partners. Then Mr. Todd left, being appointed the general manager of the Blackwell Collieries in September 1896.

Mr. Todd was only the third in a direct line to succeed to that important position, His immediate predecessors being Mr. J. A. Longden (the first), who died in Bournemouth some time ago, and Mr. Maurice Beacon, who left Blackwell For the Sheepbridge Coal and Iron Co., of which, in , due course, he became the managing director. Mr. Longden spent 18 years in Black well. Mr. Deacon seven years, and in 1 September next. Mr. Todd would have completed 52 years. Under the forceful direction of these men the Blackwell Colliery Co. secured a high position among the productive firms in the Derbyshire coalfield. The achievements and the advance of the firm during Mr. Todd’s tenure of office have been enormous. To-day under normal conditions the output is about one and a quarter million tons per annum, while two valuable and most modern by-product formal conditions the output is anoui uni- mm ; i quarter million tons per annum, while two valuable ami most modern hv-product works, one at the A Winning Colliery and the other at the 15 Winning Colliery, testify to the progress of the firm in the scientific treatment of slack.

Mr. Todd, when he comes to leave Blackwell. will be remembered for big great social service possibly much as for his accomplishments as a colliery manager. Mr. Todd was for years a power in the Conservative Party. Though a Churchman, he is sufficiently broad-minded and tolerant to encourage and support the practical religious efforts of all the workmen of the Company. But Mr. Todd’s welfare work is monumental in the colliery village of Blackwell. He is a pioneer in this meritorious policy of making village life healthier and happier for the toilers, and long before the policy of the miners’ welfare schemes were evolved.

Mr. Todd had produced his own schemes of cricket, football, tennis, swimming. Boys’ Brigade. gymnasium, rifle range and other things. All these are well equipped organisations, while under the miners welfare schemes baths and a bowling green were added.

As a sportsman Mr. Todd never left it to other people to provide his recreation. While residing in Durham he was a member of a Rugby team and secured a position in the County Rugby Fifteen in the eighties. He never relinquished interest in that organisation of his native county, while he is one of the three trustees of the Durham Rugby Union and a member of its executive body. His great organising work in Derbyshire for Rugby football is too well known to need even recapitulation at this stage. His retirement will be a tremendous loss to the county Rugby movement, though the authorities may rely upon his ever watchful interest.

Cricket and Association football also had his support. Mr. Todd was also a member of the London Rugby Union, the headquarters of the game. , prominently associated with all kinds, of public work during practically the whole period of his residence at Blackwell. and he has been a member of the Blackwell Rural Council and the Mansfield Board of Guardians continuously for close upon 30 rears He was the “father” of the Rural Council, and for a good number of years he was the chairman, from which position he retired just over 12 months ago.

He gave up his Public work on these two bodies last April. He has rendered valuable service to the ratepayers in the capacity of Councillor, and his views always carried great weight with his colleagues on the Council it was a remarkable fact that political or industrial differences never weakened in the slightest degree his hold upon the electorate of the parish, and he always headed the poll at any contest. He is a Freemason and a member of the Royal Alfred and Vulcan Lodges. Alfreton. He was the virtual founder of the Vulcan Lodge, and was its first Worshipful Master, being installed on April 24th. 1922.

By his retirement Derbyshire circles, business, sporting and political, will lose a prominent supporter and organiser and an expert in all branches of the mining industry, in which he has played so prominent a part. 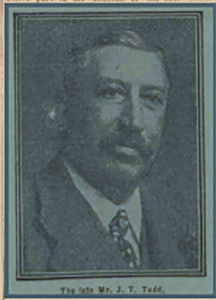 Currently All Meetings are suspended due to the Covid-19 Pandemic