Freemasons in Derbyshire We know from history that without ideals to guide us, the garden of a man’s life will not grow into a place of beauty

The term “Vulcan International” refers to an informal group of Lodges throughout the world that is named “Vulcan” and is recognised by the United Grand Lodge of England. Alfreton, Derbyshire is lucky enough to be part of this fraternity where Freemasons across the globe meet. Every Lodge named “Vulcan” that has so far been discovered has been contacted, with the object of promoting exchanges of Masonic information and views, inter-Lodge visiting, fraternal Brotherhood, and the development of friendships between Brethren and the families of Brethren.

This idea began in 1962 when the then Master of Vulcan Lodge 4510. Middlesbrough, in the Province of Yorkshire, North and East Ridings. W. Bro. Ernest G. Pipe met Bro. Norman Heaviside (currently PGM of the Provincial Grand Lodge of Durham) of Vulcan Lodge 5757. Blackhill, County Durham, whilst on one of his visits to other Lodges, and it was suggested that it would be an occasion if their respective Lodges were to have an exchange fraternal visit. The event took place on 17th September 1962 in Middlesbrough and fraternal exchanges between these two Lodges have taken place every year since that time.

Freemasons and Making Friends in Alfreton, Derbyshire and across the UK and Globe

In 1995, W. Bro. Charles Rogers the Master of Vulcan 4510. Middlesbrough, and one or two of the Brethren in the Lodge, wondered whether there were any other like named Lodges in the English Constitution, and made a search across East, West, South and North, locating another Vulcan Lodge, which was located in Alfreton, North East Derbyshire and the “Vulcan Triangle” was formed

The Vulcan Triangle was formed on 27th October 1995, between Vulcan 4382, Alfreton, Derbyshire, Vulcan 5757, Blackhill, County Durham, and Vulcan 4510, Middlesbrough, where a good time was had by all. The Meeting involved Freemasons meeting from three Provinces.

Spurred on by this success, further research was carried out that identified a fourth Vulcan Lodge 3181 in London, and W. Bro.Charles Rogers made the arrangements for their inclusion into what has now become the “Vulcan Square”. 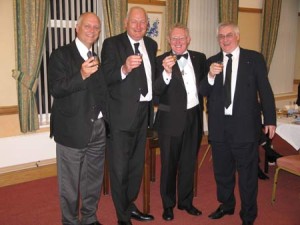 The four Vulcan Lodges met together for the first time on 18th September 1997 at a meeting hosted by Vulcan 5757 in Blackhill, County Durham. 119 Brethren were present on that most memorable occasion. The visitors included: 7 from Vulcan 3181, London, 22 from Vulcan 4382, Alfreton, and 21 from Vulcan 4510, Middlesbrough.

The second “Vulcan Square” was formed in September 1998 at Mark Masons’ Hall in London, with the freemasons of Vulcan 3181 as hosts. For the September 1998 meeting of the “Square” and at his own suggestion, W. Bro. Charles Rogers arranged for each of the four Vulcan Lodges be presented with a ceremonial Toasting Cabinet containing four “tot” glasses, each engraved with the Lodge logo, and a mini decanter with the logo of each Lodge engraved on it’s four sides, enclosed in a polished wooden cabinet in the form of a book – bound in craft blue leather.

A Freemasons curiosity led to further research and another six Vulcan Lodges were identified, 5 in the United States of America, and 1 in Canada.  More recent and more accurate information revealed that two of the Lodges in the USA had amalgamated with other Lodges and one had “disappeared” without trace. W. Bro. Rogers, with the approval of the Grand Lodge of England contacted the Freemasons of Grand Lodges concerned.

Through those Grand Lodges, contact was made to the remaining three North American Vulcan Lodges:-

Vu1can Lodge No. 74, in Vulcan Alberta, Canada registered under The Grand Lodge of Alberta.

Vulcan Lodge No. 229, in Walnut, Kansas registered under the Grand Lodge of Kansas.

Vulcan Lodge No. 498, in Bristow,  Iowa registered under The Grand Lodge of Iowa.

The “Vulcan Square” continues to bring Freemasons together to meet annually, the venue rotating between the four Lodges. The twelfth meeting was held in Middlesbrough on 19th May 2008 and the accompanying photograph shows the four Masters of London, (George Buckberry) Blackhill, (David McGeorge [SW] – The WM’s representative) Middlesbrough (Jim Sutcliffe) and Alfreton (Eric Blackwell) toasting from those “tot” glasses in the now traditional manner. (Suitably filled of course with an amber fluid of Scottish origin) Who knows, one day we may all meet as “Vulcan International” – “The Magnificent Seven”